The DOMUS infrastructure relies on an OSGi gateway, which goal is to expose local devices (using heterogeneous protocols) with remote services (from many suppliers). This gateway was developed initially within the FP5 SIRLAN project, and extended with the following models for Domus by Mathieu Gallissot during his thesis [1].

This architecture includes three level, as shown the following figure: 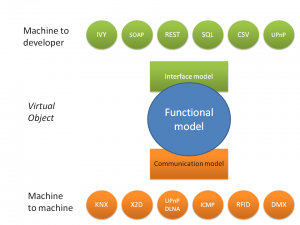